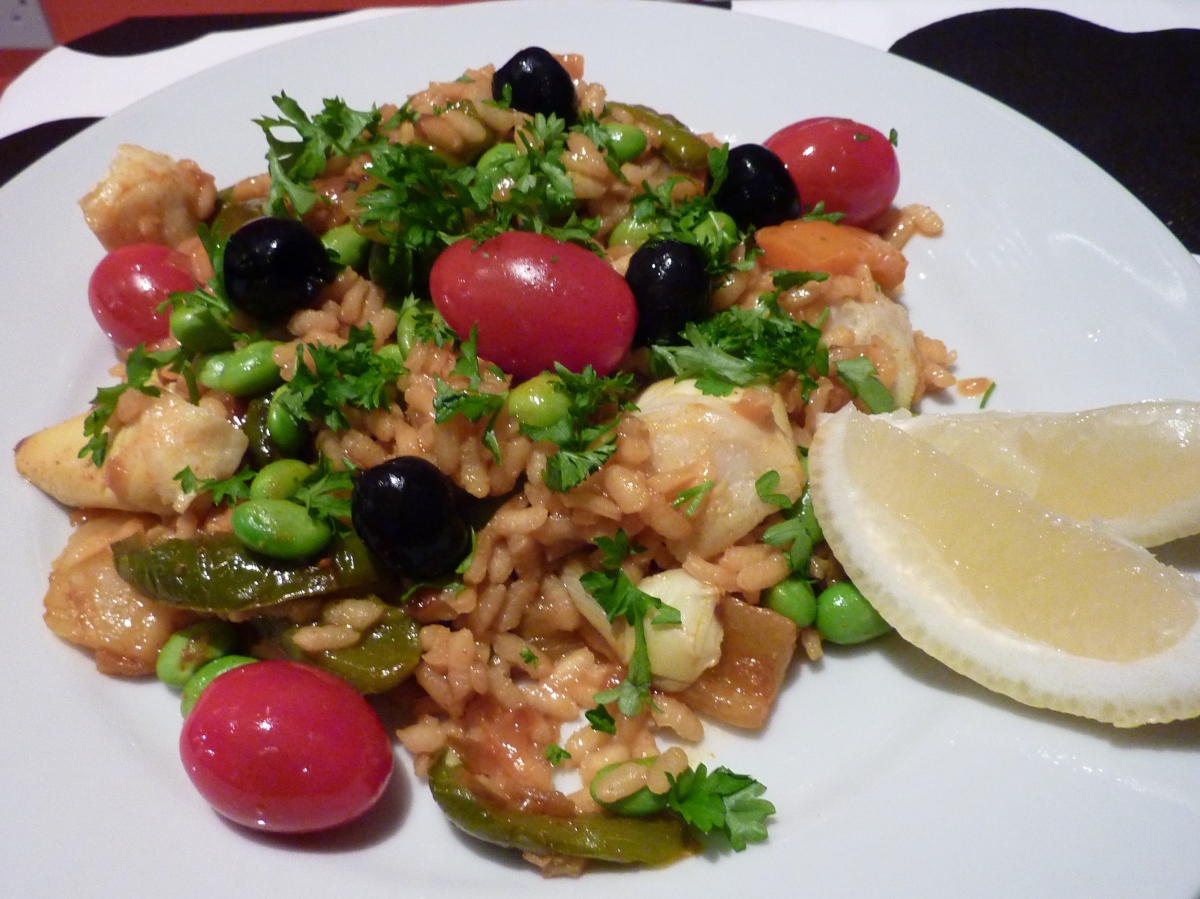 We thought it was about time we made another recipe from Plenty, and DH chose this Paella.   He said it was really easy to make & it was really tasty, and perfect for a light summer dinner.

He didn’t add any Sherry (because we didn’t have any), and used Soy beans instead of Broad beans.  The recipe suggests that Carrots, courgettes, peas or sugar snaps could be used too.

This says that it makes 2 generous portions, but DH & I only ate half of it and popped half in the freezer.  We defrosted, then re-heated it in the microwave and, although not as good as it was fresh, was still very nice.

hmmm.  Salad for dinner in the middle of Feb?  Well when it’s a recipe by Ottolenghi why the hell not?!

I must admit, I was surprised to discover this recipe that DH chose from Plenty was a salad as I had assumed it would be cooked (like the Braised chicory & beans we love so much).  But it was of course, very tasty – the Roquefort & crème fraîche was delicious & the crunchy endive (chicory) and toasted nuts went beautifully with it.

I just noticed this recipe says it serves 4 for a starter – which makes me feel better about DH & I polishing the lot off so easily for our dinner tonight.  We did have a few nuts left over, so I’ve saved those for the girls to have as a snack tomorrow.

Tip: Save a couple of endive leaves for wiping out the bowl you mixed the cheese & crème fraîche in 🙂

I left DH looking at Plenty & he decided we should eat these Baked eggs with yogurt and chilli.

Somehow I ended up making it, it took a bit longer than expected, but it was (as expected) delicious. (The photo, yet again, doesn’t do it justice!)

Pay attention to the amount of rocket required (I didn’t, and had to send DH out to buy more), and cook the eggs in a low sided bowl – I used a quite high sided ‘casserole’ type dish & the eggs took 20-25mins to cook (far longer than the original recipe says they should).  Next time I will reduce the amount of butter too – it’s very tasty (I won’t reduce the spices), but there was a bit too much of it for me.

This recipe caught DH’s eye when he was looking through Plenty, so I volunteered him to make it!

He said it was easy to make, once you’d done all the chopping, and it was very tasty & everyone liked it!!

Sorry for forgetting to take a picture, but check out the link above for one – it’s not exactly “pretty”, but it is very tasty! 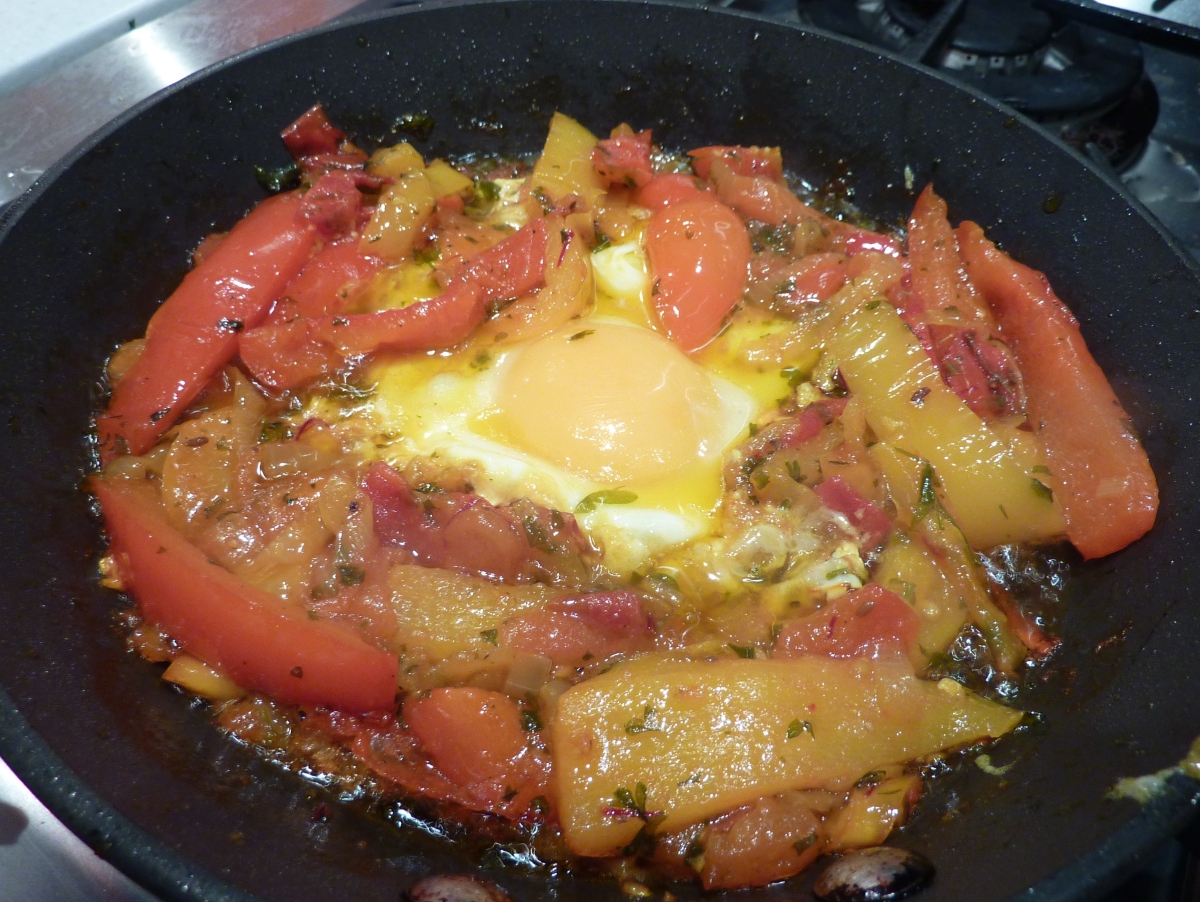 This was absolutely fabulous! Make it now!

I was reminded of this recipe when I saw it  on thepatternedplate, but why not head over to Ottolenghi’s post, which also features a video of the man himself cooking it!

The recipe below serves 4.  I can’t comment on how difficult it is to make as DH always makes it.  The first time he made it, he made half the recipe & it was a perfect amount for us both (although I could have eaten much more). Now he usually makes the full recipe & freezes half for a quick & easy meal another day (just add eggs)

The original recipe says to have two eggs each, but we usually just have one because DH thinks it would be difficult to squeeze two into our little pans.

I got Plenty for my birthday & may have fallen just a little bit in love with Ottolenghi (just don’t tell DH! 🙂   I didn’t know where to start, so thought I’d try these Sweet Potato Cakes out on DD1

Verdict?
DH & I loved them. DD1 looked at them like they were poison, but she was being a bit of a nightmare with food that day. I’m sure she’ll love them when she actually tries them!

Apparently they made this on MasterChef the other day (must buy a Yotan Ottolenghi recipe book!) – I have the recipe ripped out of an old Veg Soc magazine, which I found the other day,but it’s also on the Guardian website

The original recipe served 4 so I roughly halved everything. We also had it with some purple sprouting broccoli fresh from the garden.

It also said to cook the tofu before starting the sauce, but i think it makes more sense to start the sauce first, then put the rice on & then cook the tofu?  does mean you need 3 pans on the go though.

Both DH & I really liked this, but as tasty as the peppercorns were, they were getting to be a bit too much by the end of the meal! – Next time I’ll be putting less peppercorns in.